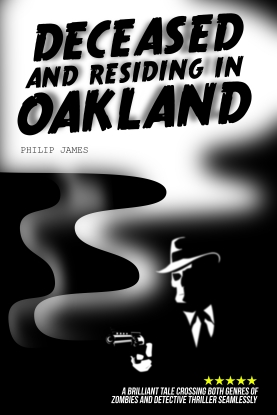 Deceased and Residing in Oakland is a mystery thriller in the tradition of American Crime Fiction, set twenty-five years after the beginning of the zombie apocalypse. San Francisco is a city under siege — it’s heaving with refugees and it’s seething with crime — but it’s still a city. It’s got cops and courts and commerce, and it’s got one burned out cop in particular living a careful life a bay away from the rot that still stalks the suburbs, looking for a heartbeat. All he wants is a quiet life, but when he’s hired to track down the mysterious daughter of one of the city’s elite and the case starts killing his friends, he’s forced on a high-velocity ride among the eccentric citizens and dangerous diversions of fortress San Francisco and all the way back to the last place he ever wants to be.

The story is a fast-paced genre-mixer presenting a hard-boiled mystery in the style of 1940s noir but with characters, twists and tension that can only occur in a Bay area struggling to sustain the remains of civilization. The result is a world-building exercise that depicts a thorough and convincing city of high-density, multi-purpose buildings, Frankenstein cars and an economy based on dark entertainments and goods retrieved from the suburbs by daredevil privateers.

Author Philip James makes no effort to hide his admiration for preceding pulp greats and the narrative regularly veers very close to homage, with an endless supply of Chandlerisms like “Mean in a feral, fundamental way. Mean the way cats are stealthy and bees are industrious and vultures are indiscriminate diners.”,  “She finished her drink and brought the glass down like the gavel of a hanging judge” and “There was a night behind her that was more than mere darkness.”

But the attention to noir narrative doesn’t make this any less a zombie thriller, and the style extends to the undead as “like an army of macabre marionettes made of broom handles and sack cloth” and “staggering and broken and with parts missing and debris acquired, like a taxi that’s just driven madly through a dense jungle.”

The plot and poetry are matched by the population of eccentrics including a one-armed barkeep, a philosophy professor preaching Nietzsche beneath the ruins of the Golden Gate Bridge, a alluring blonde pinup girl who can out-drink the toughest detective, a ruthless villain with a sadistic henchman, the world’s luckiest pirate and a shell-shocked former zombie-squad officer with an overdeveloped sense of symmetry and paralyzing fear of the undead.