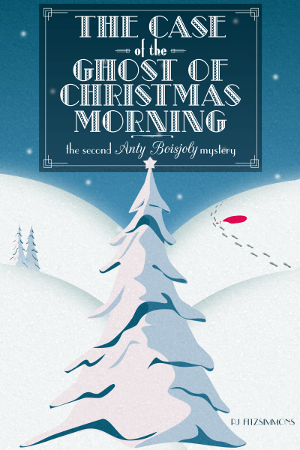 Just in time for Easter, The Case of the Ghost of Christmas Morning is finally funny enough for publication. It’s available on pre-order now for only 99 (pence in the UK, cents in US, Canada and Australia) and readers of this blog are among the few who know that, after launch, it goes to $/£2.99.

In The Case of the Ghost of Christmas Morning, Anty Boisjoly faces his second baffling mystery. This time, Anty Boisjoly’s Aunty Boisjoly is the only possible suspect when a murder victim stands his old friends a farewell drink at the local, hours after being murdered.

The Jeeves & Wooster that Agatha Christie dared not write.

This is the Jeeves & Wooster that Agatha Christie dared not write, the Poirot that never occurred to PG Wodehouse.

Like The Case of the Canterfell Codicil, The Case of the Ghost of Christmas Morning fits the narrow literary needs of those who feel that Miss Marple isn’t frivolous enough or that Blandings Castle could stand a few more baffling murders.

The Case of the Ghost of Christmas Morning is available now for pre-order for delivery on April 17th:

By 1944 Raymond Chandler had written The Big Sleep and Farewell My Lovely and the line “She had eyes like strange sins” and he was accordingly at the top of his game when he wrote “The Simple Art of Murder” for Atlantic Monthly and sank the sturdiest and most explicit signpost at a major turning point for pulp fiction.

Since then the essay has held its ground as an important and seminal summary of what’s good and bad in fiction in general and detective fiction in particular, at least from the perspective of one of the genre’s recognised greats. It amounts to a declaration of victory for a certain type of rigorous realism and American-style iconoclasm, especially with regards to the insufferably mannered, formulaic and imperious English forbears of detective fiction. Chandler takes on Dorothy L. Sayers and an editorial he describes as an “essay in futility” as representative of the pompous view that detective fiction can never be real fiction.

There are no vital and significant forms of art; there is only art, and precious little of that.

And he’s particularly merciless with the progenitor of Winnie The Pooh, AA Milne, for his crime against fiction “The Red House Mystery”. The problem with the Milne Story is that it’s implausible and relies on far too many very unlikely or unnatural or irregular occurrences. Chandler picks the story to pieces, in fact, and the best he can say about it is that it’s “not a deliberate fraud”.

In short, Chandler dislikes a cheat. And this is the meat of the essay for any writer who cares about adding to the modern canon as begun by Hammett and sustained by Chandler and MacDonald (but clearly not Spillane). It needs to be realistic. This doesn’t mean that mad things can’t happen and that character and morality can’t be tested to limits beyond that which most readers will ever see, but it has to be logically consistent and you can never go back and try to fill in a litany of plot-holes with the cheap pitch of coincidence and oversight and the assumption that your readers are lazy or stupid.

That means no deus ex machina, no sending Hastings down to London in chapter three to return at the denouement with evidence of a secret twin or a second will or true likeness of the deceased, no squadrons of policemen too stupid to notice that which the amateur detective picks up on instantly. It means, simply, that your reader has to stand a chance to solve the problem with the evidence presented. You can misdirect your reader, as Hammett does so originally in the Maltese Falcon, or shock him as Chandler does so cynically in the Little Sister, but you can’t lie and you can’t cheat and you can’t deprive the reader of a fighting chance.

You don’t need to like the advice or follow it to be a good writer unless part of your take on that means being a good writer according to the harsh and authoritative definition of Raymond Chandler. Or if you simply agree with the hypothesis that rigour in writing inevitably surfaces as quality then you could certainly choose a worse measure than an obligation to reward your readers for their attention all the way through to the end.