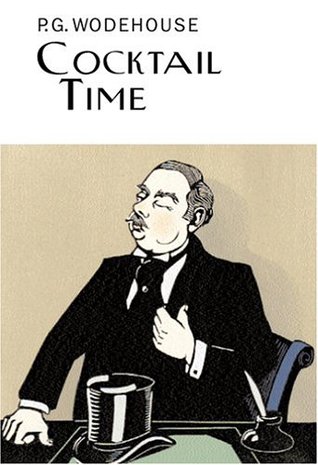 I can’t get enough of Uncle Fred and although I prefer him as or introducing an imposter into Blandings Castle, it’s refreshing to see his irrepressible wit thriving in this new terrain.

The title of the book is taken from the title of the book that Fred maneuvers his old friend Sir Raymond Bastable into writing, as an indictment of a debauched younger generation and as a reaction to having his top hat knocked off by a well-aimed Brazil nut sling-shot from a window of the Drones club by an assailant whose identity, by page two, provides a very clear idea of the ride the reader is in for.

The success of the book within the book is a catalyst for a sequence of problems which beget solutions which beget still larger problems and at the centre of it all is Uncle Fred, orchestrating the various threads to the inevitable benefit of timid suitors and sundered hearts. I think that Fred ties up more loose ends in Cocktail Time than he does in both his appearances at Blandings (Uncle Fred in the Springtime, 1939, and Service with a Smile, 1961) put together.

The subtly different flavour of Cocktail Time is derived from the new surroundings. There’s no Blandings Castle and hence no Emsworth, Empress, Connie and her type nor Freddie and his. Instead there’s marginally more Uncle Fred than usual and Bastable and his nephew, Cosmo, and Lord Ickhenham’s godson, Johnny Pearce, get to share their unique and uniquely amusing take on events as they rapidly unfold. In Cocktail Time, Uncle Fred doesn’t hog all the funniest lines.

The fact that Frederick Lord Ickenham also manifests as Galahad Threepwood and Psmith, according to requirements, doesn’t alter a bit his status as a Wodehousian pillar as distinct and reliable as Jeeves and Wooster. Indeed, as Cocktail Time so deftly illustrates, this mutability gives Fred enormous latitude. This has given me a particular appreciation of Cocktail Time as I plug into it for regular refills of attitude while writing The Case of the Ghost of Christmas Morning, the second mystery featuring Anty Boisjoly whose character is shamelessly inspired by Uncle Fred.

Leave It To Psmith is, to my mind, the book in which Blandings finds its voice. There’s yet no Empress, and she’s sorely missed, but the absent-minded Lord Emsworth substitutes flowers for his prize pig and Connie is present, as is the efficient Baxter, romance, imposters, a conundrum and, above all, someone like Galahad.

In this, his final appearance, Psmith (the P is silent) has also found his voice as the totem of free-wheeling, free-thinking and fast-talking flippancy that will later be embodied by Emsworth’s brother Galahad and, later still, by Lord Ickenham (Uncle Fred). The perfectly acceptable twist in this case is that Psmith is among the sundered hearts that need joining, and the imposter he introduces is himself, playing the role of volatile Canadian Poet Ralston McTodd. He joins a cast of fellow poets, valets, archivists and thieves to further or foil Freddie Threepwood’s plan to allow Connie’s oppressed husband to secretly divert funds to his step-daughter so that her husband and Psmith’s school chum might buy a farm, ensuring the couple’s happiness.

The full Blandings prior to Leave it to Psmith is Something Fresh and it’s an entertaining book on its own, introducing many of the themes and devices which become, in time, grist for the mill of Psmith and his kind. Henceforth, a Blandings without some variation of Psmith, Uncle Fred, or Galahad is like Wooster without Jeeves.

From my own biased perspective, this might even be the best Blandings because it has, as a percentage of the narrative, more Psmith per square foot than any of the others. The irrepressibly optimistic and interchangeable souls of Psmith, Uncle Fred and Galahad infuse and inspire my own Anty Boisjoly, my answer to a net global shortage of Blandings. 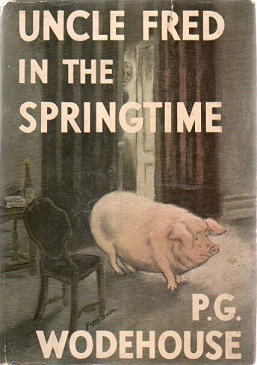 Uncle Fred in the Springtime is the fourth time that Wodehouse has sent imposters to Blandings (the first being Something Fresh, in 1915) and the third time he did so on behalf of thwarted romance. He would go on to spirit imposters into the castle on no fewer than ten occasions, eight times in aid of joining sundered hearts.

This was the Wodehouse formula: set the scene with familiar problems, tweak the details, rotate the cast of clever, eccentric, or simple-minded characters, and let them sort themselves out in the most entertaining manner possible.

There’s almost always at least one fragile romance, an imperious sister, and an intransigent peer, and there’s always an Uncle Fred. It’s not always Lord Ickenham, as it is here and in Service with a Smile. In fact it’s usually not the witty, urbane, fun-loving, fast-talking bon-vivant. It’s usually Galahad Threepwood, but the effect is invariably the same — an absolute delight.

Galahad and Uncle Fred are interchangeable in the same way that Connie and the rest of the (eleven and counting) sisters to the beleaguered Lord Emsworth are effectively the same person. Fred and Gally embody an attitude manifest in quick and quick-witted, irrepressibly optimistic dialogue, indifferent to the originality or lack thereof of the underlying plot.

Which is just as well, because of all solutions that Wodehouse has applied to the same problem, Uncle Fred in the Springtime is the least inventive. The strategy of “stout denial” is employed again and again and, while it’s every bit as funny as any solution that Wodehouse has ever thrown at thwarted romance, it’s a little shiftless compared to the infinitely creative dissemblance of, say, Full Moon, in which Galahad introduces a minor painter into the castle as Edwin Landseer, or Leave It To Psmith in which the title character (another proxy for Fred) appropriates the identity of an obtuse Canadian poet so that he might steal Connie’s necklace in the cause of, obviously, thwarted romance.

My personal bias transcends even that — it doesn’t matter if there are pigs or broken hearts or clever plots and ploys and, in fact, it doesn’t even matter all that much that there’s a Blandings. The single pillar of the castle for me is the persona of Galahad/Fred/Psmith that gives voice to the free-wheeling, free-thinking, and fast-talking flippancy that inspires Anty Boisjoly. This is my answer to the problem of not enough Galahad, even within the books, which I find myself wishing were in the first person and entirely infused with this happy character in the same manner that the Jeeves & Wooster stories are told from the perspective of Bertie.